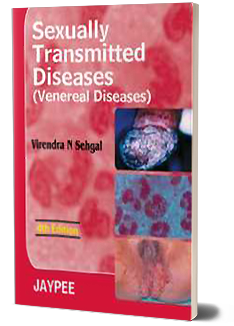 The book Sexually Transmitted Disease (Venereal Disease) is written primarily for the students; it is hoped, however, that it may be useful also to the practising physicians. Inspired by the success of third and preceding (first and second) editions, the current edition (4th edition) has been updated. The cardinal clinical features of the sexually transmitted diseases have been projected in the table so as to form the impression at a glance. Similarly, they are aptly illustrated through black and white and selected colored photographs. The newer methods for diagnosis have been added in the present text as well as in the form of appendices. A substantial update in the management of these diseases has been effected; centre for disease control (CDC) has come in handy for the purpose. Besides, several chapters namely non-gonococcal urethritis, Reiter’s disease, Pelvic inflammatory disease, Herpes geni­talis, acquired immunodeficiency syndrome and Behcet’s disease have been included, in order to make the text complete and comprehensive. Furthermore, the onus of control­ling HIV and AIDS has prompted to incor­po­rate syndromic (symptomatic) approach in addition. Beautiful and depictive flow charts covering the commonly presenting facets namely urethral and vaginal discharge, genital ulcers and inguinal bubo have been incorporated.