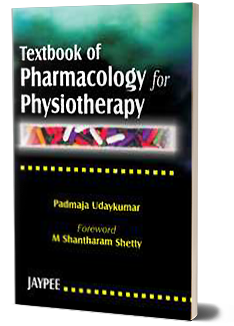 Textbook of Pharmacology for Physiotherapy

The book “Textbook of Pharmacology for Physiotherapy” is a valuable book for physiotherapy students to grasp knowledge about the pharmacology. This book contains 12 chapters that comprise different topics. It is presented in an easy and comprehensible manner. More importance is given to topics such as analgesics, skeletal muscle relaxants and other musculoskeletal disorders. Chapter on general pharmacology describes about routes of drug administration, pharmacokinetics and gene therapy, Autonomic nervous system along with cholinergic system, adrenergic system and adrenergic antagonist are explained in a separate chapter. Musculoskeletal system, drugs used in the treatment of local muscle spasm, drugs used in other musculoskeletal diseases and drug and exercise are explained. Chapter on drugs acting on the kidney discusses diuretics and antidiuretics. Cardiovascular system entails with antiarrhythmic drugs, pharmacotherapy of shock and plasma expanders. Explanation on central nervous system involves general anaesthetics, alcohols, CNS stimulants, opioid analgesics, antagonists, antidepressants, autacoids, respiratory system, blood, gastrointestinal tract, chemotherapy and hormones are explained in separate chapters.