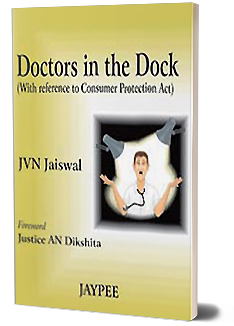 Doctors in the Dock (With Reference to Consumer Protection Act)

An attempt has been made to incorporate practically the entire case law that came after the publication of the first book. The topics have been rearranged in order to facilitate the readers to search out the law required on a particular subject, and some more chapters have also been added. As a matter of fact, the cases against the doctors are increasing everyday regarding their alleged negligence and deficiency in service. Previously such cases were dealt under the general law (Law of Tort and Contract Act), but with the enactment of Consumer Protection Act the medical services have been included in the ‘service’ as defined under the Act with the result such cases have arisen in a good number. The law on the subject is vast and it is not possible to foresee all the eventualities. However, a humble attempt has been made to provide as much matter on the subject as possible keeping in view the decisions of the various redressal agencies created under the Act and the decisions of various High Courts and the Supreme court.