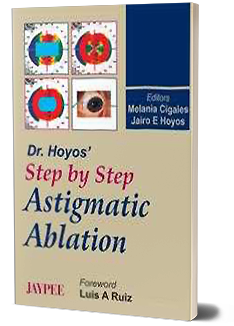 In this book we have tried to transmit to the reader the idea that astigmatism is really the dioptric difference between the two corneal meridians. Thus, astigmatism is not a given number of diopters rather it is defined by two dioptric values. To treat astigmatism we are to modify the curvature of the cornea and we need to know the refractive error of each of the two meridians. We will know if we need to flatten the meridian (when its error is myopic) or steepen it (when it is hyperopic) or even when not to modify the meridian because it is emmetropic. This book analyzes step by step laser ablations to treat myopic, hyperopic and mixed astigmatism. Methods are described for optimizing the treatment of astigmatism through the combined use of positive and negative cylinders. Customized ablation, directed towards not only correcting the refractive error but also towards achieving a good quality of vision, is not forgotten. The correction of astigmatism in cataract surgery in which the surgeon increasingly tries to achieve emmetropy is also reviewed. Following the book’s chapters, we have included appendices explaining basic refraction concepts such as the spherical equivalent and cylinder transposition.