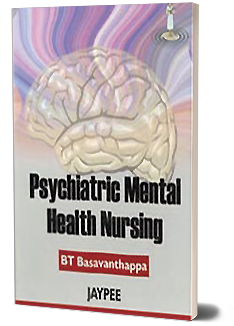 A meta-analysis on prevalence of mental and behavioural disorder in India revealed and estimated prevalence of 58.2 per 1000 population. Today, most mental patients, even those with severe disturbances, spend most of their time in community. At the same time, the range of problems addressed by psychiatric mental health nursing expanded. Students must learn not only about severe and chronic mental illnesses, as in the past, but also about the mental health needs of individuals, families, small groups, and communities, about people at risk for violence, suicide, homelessness, substance abuse, and about the psychosocial aspects of physiological illness and disability, socio-economic disadvantage, racial discrimination, cultural differences, sexual and gender issues, age-related problems and lifestyles. This book is containing all aspects of psychiatric mental health nursing. This book included not only the beliefs and knowledge peculiar to psychiatric mental health nursing, but also applicable knowledge from other nursing specialities and from associated disciplines such as psychiatry, pharmacology, neurology, sociology, and psychology. And also it presents an information that is complete, accurate and up-to-date.