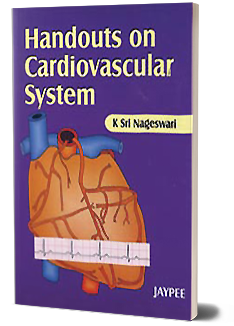 The Handouts on Cardiovascular System are an adjunct to the standard textbooks of Physiology describing Cardiovascular Physiology in nutshell. The handouts describe in brief concise manner, various physiological phenomena, enumerating the salient features in the form of flow charts and block diagrams for better comprehension. The handouts are meant for the students of MBBS and allied disciplines. It is difficult for the students to read the entire textbook prior to the examinations and there is paucity of time. The Handouts on Cardiovascular System are written with the intention, to help the student in preparing for the theory and viva-voce examinations and for easy revision and memorization of the salient features, after going through standard textbooks. These handouts are also useful while preparing for various entrance examinations. Though the handouts are not a complete replacement for the standard textbooks of physiology describing the cardiovascular system in detail, care was taken to describe all the chapters falling under the heading of cardiovascular physiology with minute details. The figures are less in number as compared to standard textbooks. The handouts were being distributed to undergraduate medical students during the past few years and as per their feedback, have been excellent in clearing their concepts, understanding and memorization of the subject of physiology.