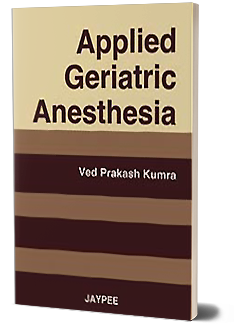 Population explosion over the age of 65 years, represents the fastest growing segment globally, especially in the developing countries. In India, according to the Census, Registrar General of India, 2001, the life expectancy has increased from 32 years in 1947 to 65 years in 2001 raising the quantum of elderly population from approx. 19.00 millions in 1950 to 75.9 millions in 2001 and is expected to be more than 140 millions by 2020. Aging of the baby-boom population and the decrease in adult mortality rate seen in the recent few decades has also predicted a dramatic increase in global elderly population between 2010 and 2030. Population over 65 years is expected to grow by 75%, and the cumulative grow th of the population above 85 years, between 1995-2050 is expected to rise by 400%. The implications of aging population for the practice of medical speciality especially anesthesiology, are profound as age-related changes in physiology and pharmacology can adversely influence every aspect of perioperative care. In addition, associated age-related co-medications in over 50% of these elderly make their management more complex and complicated. They are also prone to require at least one or two surgeries in lifetime. The associated diseases like hypertension, ischaemic heart disease, diabetes mellitus and hepatorenal dysfunction essentially warrant thorough assessment and planning of a clear-cut anesthetic protocol in this age group. This has projected the need for another subspeciality, geriatric anesthesia, to provide holistic and efficient care for this growing population. During the past few years, number of lecture series, reviews and guidelines are being issued from time to time in the western literature to streamline various issues for the management of geriatric surgical population. Seeing a morbid centurion on to operating table an anesthesiologist feels more than challenging. While dealing with the elderly we should appreciate that there is not always a correlation between the biological and the chronological age. It makes the anesthesiologist’s task more difficult. A septuagenarian, thus, could physiologically be more decompensated than an octogenarian. It is heartening to observe the concern of Dr VP Kumra and other contributors. Forewarned is, indeed, forearmed. Their endeavour to educate will go a long distance to arm the anesthesiologist on various fronts and suitably equip him. Compromised as these elderly are, it becomes difficult to retrieve an undesirous anesthetic move. With detailed information on almost all the aspects, the book will be a ready source of reference under such situations. The book will adequately address the needs of the knowledge seeking students, practitioners and consultants. The practitioners of Gerontology should also find the book useful. However, the one to benefit the maximum is the remotely placed anesthesiologist starved of contemporary knowledge. Well conceived and timely written by Indian authors the book will also serve the growing needs of a growing population.