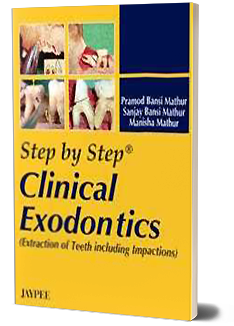 This book is written in a simple language, point wise explaining the text, well supported by charts, and figures, etc. which will help the students, clinicians, teachers to easily understand exodontics. The book covers all the necessary steps/procedures required before, during and after, oral surgery right from response of tissues to surgery, instruments, operation room decorum, the roll of “humoral defenses” cover of antibiotics as per “Burke’s Principles”, their dosages, premedication, anesthesia, analgesics effective against postsurgical pain, position of dental chair, position of operator, assistant, patient, for extraction of individual teeth. The special feature of this book is that, the actual movement of roots inside the socket in response to the applied forces during individual tooth extraction is well shown in photo. How and why which wrong movement of forcep will exert which strong force at what point and can break the tooth/root at which point is well demonstrated. The SBE prophylaxis as per ADA recommendations is also well covered. Commonly used “Antibiotics” and “Analgesics” are described in table form covering name of drug/ action or effect/doze/contraindications/side effects, etc. are well demonstrated. General outlines for “oral surgery”, like preparations and drippings for the patient, position of the patient, the operator, and the assistant and instrument nurse are well covered well. Use of specific instruments rather than universal ones, techniques of surgical flaps raising, alveoloplasty, mandibular and maxillary residual root extractions, by proper use of appropriate elevators and applied forces is also well covered. Impactions, their classifications, Odontectomies, removal of deciduous teeth, supernumeraries, impacted canines, etc. are simplified by dividing them into 3, 4 or 5 split techniques and then each technique is well explained with the help of many photos, movies, video clippings right from the first cut given on tooth to final completion of the operation. What emergencies can arise in dental clinics, how to deal with them, syncope, dry-socket, displaced teeth into oropharynx, technique of cricothyroidectomy, control of postoperative infection into facial spaces (Koli’s) are also well described.