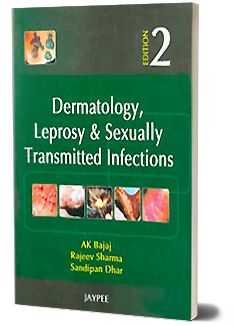 The triple specialty of Dermatology, Venereology and Leprosy has been overlooked by the medical advisors and planners as exemplified by the meagre number of lectures and limited practical exposure during undergraduate training. Thus, even a competent family physician is diffident to handle simple, common cutaneous ailments though he/she is able to manage complicated cardiovascular and neurologic disorders. Due to poverty, poor civic conditions, industrialization, environmental pollution and general awareness, there has been a tremendous increase in the number of patients seeking consultation. Such an amount of clinical work has overstretched the meagre resources of the tertiary care centers to the extent that genuine patients are denied the benefit of expertise of the specialists. Keeping these factors in mind, an attempt has been made to include short and crisp text of various common and some uncommon disorders with illustrations so as to make this book useful for general practitioners and even undergraduates. As this has been written by practising dermatologists for practising physicians, a special emphasis has been laid on various therapeutic modalities.