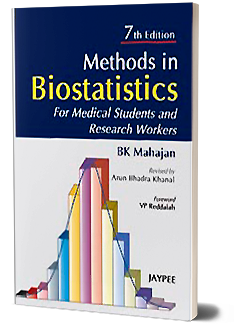 Methods in Biostatistics for Medical Students and Research Workers

The book Methods in Biostatistics provides useful information in understanding biostatistics and its usage in various field of science. Data can be collected through experiments, population surveys and hospital records. The data can be presented in various forms depending upon whether it is quantitative or qualitative data. Variability is the dispersion of spread of data. Different types of variability known are biological, real and experimental variability. Normal distribution of the data forms the basis for the tests of significance. Sampling of data is done to estimate various population parameters and to test the hypothesis about the population. Common tests performed are Z test, t test and χ2 test. The test of significance is performed by stating the null hypothesis, determining probability and making conclusion on the basis of P value. Significance of difference in means and significance of difference in proportions of large sample are described. The association between two groups can be given by correlation. Different stages in studying and interpreting data involves data collection from the different sources, its compilation and presentation, analysis of data by statistical methods and finally interpretation of data. Uses of computer in public health care, their utility in hospitals and in medical practice is important. Also usage of SPSS manual is described.