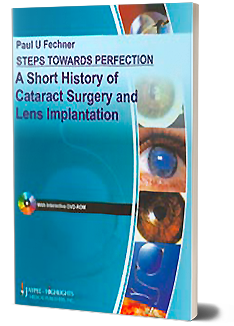 Steps Towards Perfection: A Short History of Cataract Surgery and Lens Implantation

Dr Teichmann had held several positions at university clinics, so in Kiel, Germany, Canada and Australia, but most of his life time in Riyadh where he was Chief of the Anterior Segment Department of the King Khaled Hospital. There he found the cicumstances and time to care for the book Ocular Therapeutics, Pharmacology and Clinical Application, of which he originally was my co-author and for later editions the only responsible editor. It became his book and was his life‘s lasting achievement, with four editions in German, one in English and one in Chinese (with 50,000 copies printed). Not only was Klaus an extraordinarily knowledgeable and well-read man, but he also had a fascinating personality: inquisitive, enthusiastic as teacher, unfailingly generous as colleague, warm-hearted and completely reliable.