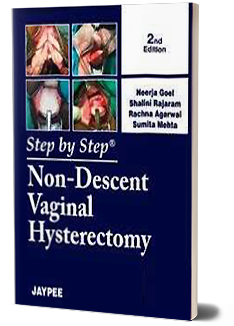 In this second edition of Non-Descent Vaginal Hysterectomy include newer techniques and advances. This book brings you a few new procedures which include a suture-less technique using a vessel sealing system, the BiClamp; this makes surgery effortless and almost bloodless. Another technique which is in vogue is “aqua-dissection” which produces both tamponade and allows easy dissection, is also described both in the video and in a text which is amply illustrated. Vaginal hysterectomy is not complete without mastering the technique of oophorectomy. The hesitancy on the part of the gynecologist to attempt this procedure should be overcome and the correct technique can be learnt after assessing operability which is described in the chapter. Volume reducing techniques improve accessibility to fundal/broad ligament structures. Various methods such as enucleation, slicing, wedge resection, coring and morcellation are described. “Step by Step Presentation of Vaginal Hysterectomy” for non-descent uterus will provide every surgeon the required guidance and incentive to carry out this ideal method of hysterectomy. This book should be bacon to all in the field of gynecology to advance the wonderful art of hysterectomy via the vaginal route.