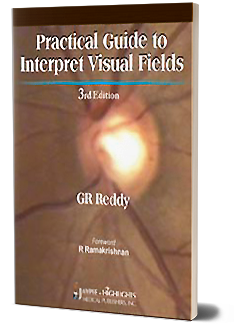 In this book, it takes a great care to help the reader understand single field analysis printouts in depth. The role of each zone in a single field analysis printout is well explained and so is the overview printout. The fact that the interpretation of a visual field depends on the stage of glaucoma is stressed, and the same analysis is given to scenarios when the glaucoma is associated with a cataract. In this edition of book the point that the total deviation plot should be concentrated in a case of a localized field defect is emphasized several times. It has clearly explained that setting the target pressure depends on the depth and extent of the field defect. Copious examples have been given to explain the 7th best point of TDNP, and the idea behind the creation of pattern plots is explained in a better fashion than the previous editions. Other concepts, like the change in mean deviation index in cases of localized field defects differs from that of the generalized field defects is greatly emphasized. The notion that a black square in the probability plot is not an absolute scotoma, but only a representation of a P value of 0.5% is stressed many a time. The most important concepts were intentionally repeated many times over so that they would be well remembered. The highlight of this book is the chapter on the change analysis printout, or box plot that is often neglected. It had repeatedly stressed the importance of box plots in assessing the depth of the scotoma. Visual fields cannot be interpreted alone, and must always be correlated with a fundus picture. With this, disk photographs have been incorporated along with the visual field printouts.