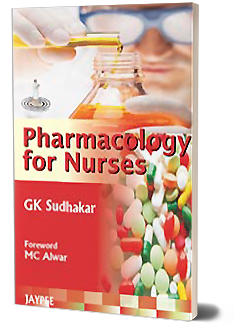 General anesthesia is essential to surgical practice because it renders patients unconscious while causing muscle relaxation and suppression of undesirable reflexes. Inhaled gases are primarily used for maintenance of anesthesia after administration of an intravenous agent. They do not cause post operative respiratory depression because they are rapidly eliminated from the body. Intravenous anesthetics rapidly induce anesthesia and must therefore be injected slowly. Local anesthetics are applied locally and block nerve conduction of sensory impulses from periphery to CNS. They abolish sensation in a limited area of the body without producing unconsciousness. Opioids are natural or synthetic compounds that produce morphine like effects. They act by binding to specific opioid receptors in central nervous system (CNS) to produce effects that mimic the action of endogenous peptide neurotransmitters. Non steroidal anti-inflammatory drugs (NSAIDS) inhibit synthesis of Eicosanoids from Arachidonic acid. These drugs inhibit cyclooxygenase (COX) the enzyme responsible for first step of prostaglandin synthesis. COX-1 is constituently present in many tissues. COX-2 is induced in inflammatory cells and is found in endothelial cells. COX-3 is found in the brain. Aspirin is only irreversible inhibitor of COX. Rheumatoid arthritis is caused by an autoimmune reaction that targets joints and cartilage as well as other tissues and organs; the body’s own macrophages attack and destroy cartilage and connective tissues. The general characteristics of disease modifying antirheumatic drugs (DMARDS) are to suppress proliferation and activity of lymphocytes and polymorphonuclear neutrophils (PMNS), to counteract joint inflammation and destruction. Gout is a disorder of uric acid metabolism that results in deposition of monosodium urate in joints and cartilage. Gout is of two type’s namely (1) primary gout and (2) secondary gout. Primary gout is caused by over production or under excretion (e.g. diabetes, starvation states) of uric acid. Secondary gout is caused by accumulation of uric acid due to one of the following factors like (a) disease such as leukemia and (b) drugs that interfere with uric acid disposition such as diuretics. An epileptic seizure originates in the brain, when a group of neurons spontaneously begins to send out impulses in an abnormal uncontrolled way. These impulses are spread from neuron to neuron by neurotransmitter hormones. Symptoms of epilepsy range from barely noticeable staring or lack or attention to full tonic-clonic seizure with unconsciousness, muscle jerking, tongue biting and incontinence. The type of symptoms depends on number and location of the affected neurons. Each type of epilepsy displays a specific EEG pattern during a seizure. The term mental illness refers to a variety of emotional disorders that involve abnormalities of personality, mood or behavior. Mental health problems include anxiety, depression, suicide, post partum depression, psychosis, drug addiction or alcoholism. The symptoms of psychosis include a loss of touch with reality resulting in delusions, hallucinations, inappropriate mood and bizarre behaviors. This may be based on overactivity of neurotransmitter dopamine in the brain either from overproduction of dopamine or from hypersensitivity of dopamine receptors. Imbalances in neurotransmitters Serotonin, Acetylcholine, Noradrenaline and Histamine are thought to play a role in psychosis. Schizophrenia is the most common of psychosis. The term affect refers to an emotional feeling or mood experienced by patient’s outward appearance. Affective disorders depend on two many emotions namely depression and mania. The depressed patient experiences insomnia, crying, lack of pleasure in any activity, increased or decreased activity, lack of ability to act, or concentrate, feelings of guilt, helplessness, hopelessness and thoughts of suicide and death. Depression is caused by decreased levels of neurotransmitters like Noradrenaline and Serotonin in the brain. The second emotion of affective disorders is that of mania. The manic patient shows hyperactivity agitation and euphoria, thinks and talks rapidly and devises many impressive plans, but shows poor judgement. This is associated with increased levels of noradrenaline in the brain. Mania coupled with depression is known as manic depressive disorder or bipolar disorder because patient’s mood swings between two opposite poles of emotion.