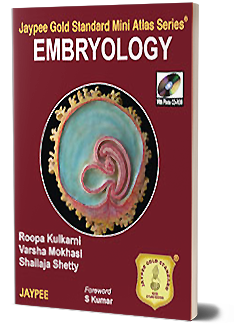 The study of embryology is very fascinating. It is divided into various chapters. The development of various organs and organ systems develop simultaneously. Therefore for descriptive purpose the book divided into four chapters. In the first chapter of human embryology, the stages of development of the individual (human being) before birth (prenatal) and after birth (postnatal period) have been mentioned along with the period of growth. The purpose is to familiarize various terminologies during the embryological study. During the intrauterine development of the human, the first three months is the most critical period. Any mishap during this period gives rise to termination of pregnancy or abnormal development of the organs involved. All the germ layers—ectoderm, endoderm and mesoderm develop from epiblast. The hypoblast gives rise to the extra embryonic mesoderm. The following four chapters explain about the formation of germ layers, bilaminar and trilaminar embryonic discs, foldings of the embryo and the embryo assuming the miniature of the human being. All the organs and organ systems are developed by the end of the first trimester and further growth, differentiation and establishment of function occurs in the next trimesters. The nutrition to the embryo is by yolk sac initially but is taken over by the placenta later. The pharyngeal apparatus, various systems like the alimentary canal, its associated glands, the respiratory, cardiovascular, urinary, genital, endocrine systems, nervous system and special sensory organs along with the endocrine organs develop in the second and third trimesters. The placenta is the organ having a short life of 9 months, performs functions for the: maintenance of pregnancy till the end of 9 months and also to expel the fetus once it is mature. Various stages in the development, the germ layers involved in the formation and differentiation of the tissue are extremely important and any interruption in this process of development gives rise to anomalies. Some of the anomalies can be treated surgically by planning the surgery well in advance.