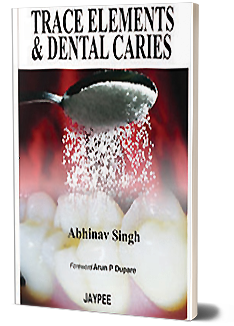 Teeth are reported to be suitable indicators of trace element exposure for a wide range of elements. Since teeth accumulate a variety of trace elements, it is interesting to study the elemental distribution in human teeth to evaluate the effect on dental caries. Although there was an early start with fluoride, dental research had not considered other trace elements. Trace elements other than fluoride may account for significant differences in caries prevalence observed in the inhabitants of communities whose diets, living conditions, racial stock and climate are similar. Trace elements may reduce or potentiate caries rates; as in populations ingesting foods and water with a high selenium, copper and cadmium content, are more prone to dental caries; high molybdenum levels in soils or drinking water have been correlated with reduced caries. There has been a long felt need for a comprehensive book on this subject to bridge the gap between the vast information in this field and a relevant arrangement of useful knowledge. The textbook of “Trace Elements and Dental Caries” is one of its kinds now available in the market. Extensive coverage in depth into various trace elements has been done in order to reduce the task for students, specially postgraduate and other researchers in search of relevant books and journals. As a novel approach, special emphasis has been laid to describe the epidemiological aspects of trace elements and dental caries in various populations. Trace elements included in the book are molybdenum, selenium, vanadium, zinc, manganese, sulfur, copper, strontium, barium, lithium, titanium, lead and cadmium. Apart from these other trace elements included are boron, aluminium, yttrium, zirconium, tin, chlorine, bromine, etc. In matters of style liberal referencing has been favored. This gives readers a chance to pursue further issues that interest them and references give the basis interpretation of the more contentious issues.