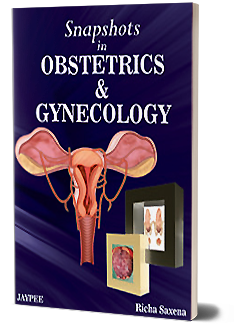 Snapshots in Obstetrics and Gynecology

This book “Snapshots in Obstetrics and Gynecology” aims at simplifying the subject of obstetrics and gynecology as much as possible. The idea behind “snapshots” is to present all important topics in obstetrics and gynecology, which are encountered in the clinical practice in form of brief snippets and snapshots. The book has been broadly divided into two sections—obstetrics and gynecology. The section on obstetrics has 5 Chapters, while the section on gynecology has 10 Chapters. Various topics in each chapter have been termed as a “fragment”. Each fragment has been arranged in the form of a predesignated template which has headings such as introduction, etiology, diagnosis, differential diagnosis, management, complications and clinical pearls. All these headings have been accompanied by relevant symbols. This Snapshots in Obstetrics and Gynecology is a small handbook which would serve as a ready reckoner and a pocket-sized reference source for both the general practitioners and the trainee students (especially the undergraduates). Text is accompanied by approximately 400 beautiful color images (both photographs and line diagrams) and numerous flowcharts.