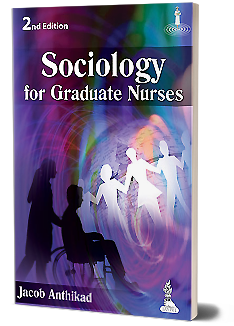 Sociology is the youngest of all social sciences. The Greek philosophers Plato (427–347 BC) and his disciple Aristotle (384–322) attempted an analysis of the city community of their state. In India, king Manu laid the foundation of sociology. ‘Manusmriti’ discusses the observance of moral laws and duties, which is the highest ‘Daram’. Sociology is the study of relationships between man and his environment. Auguste Comte (1798–1857), the French philosopher is considered ‘Father of Sociology’. Medical sociology is very important for nurses. Man is a social animal and socialization is very important for him culture conditions the process of socialization and has an impact on personality. Social relations are of two types are, associative and dissociative. The scientific study of human population is called demography. The Malthusian is one of the earliest theories on population. India is suffering from population explosion as feared by Malthus. Family is the most important primary social institution. Hindu social organization is characterized by caste system. The four-fold Varna system is the basis of caste system of India. Community Development Programs came into existence on 2nd October, 1951 as an attempt to bring about a social and economic transformation of village life through the efforts of villagers themselves. Society controls the behavior of individuals by formal and informal means. The formal controls are by law, education and coercion. Informal control is by customs, beliefs, social suggestions, ideologies, religion, art and literature, humor and satire, public opinion, mores, folkways and fashions. Social disorganization leads to social problems. Some of the many social problems are poverty, urban social problems, negligence of elders, unwed mothers, dowry, prostitution, drugs addiction, alcoholism, Juvenile delinquency. The handicapped, crimes against women, child abuse, housing, minorities, illiteracy and inadequate food supplies. Nurse has a significant role as a change agent in bringing about good quality of life to people at large and helping to solve social problems.