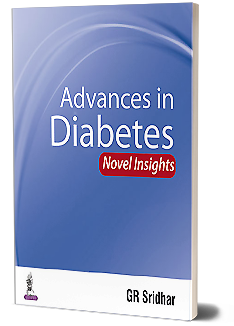 Diabetes is one of the most common endocrine disorder. It is a condition where the blood sugar level consistently runs too high. This book “Advances in Diabetes: Novel Insights” is divided into 16 chapters. First chapter discusses on psychological stress which has been implicated in the onset and course of diabetes mellitus. It also discusses on relaxation response which refers to methods that can be applied to counter the effect of stress, a “wakeful. Second chapter focuses on diabetes and diseases of the bone caused by it. Insulin and insulin signaling pathways are described in third chapter. Fourth chapter gives a glimpse on diabetes and periodontal diseases. Fifth chapter covers peroxisome proliferator-activated receptors (PPARs). Lucid and comprehensive understanding on epigenetics has been provided in sixth chapter. Metabolic surgery for diabetes mellitus, physical exercise, cognition, incretins, plant insulins, and depression and mental disorders in diabetes are discussed briefly in seventh to eleventh chapter. The focus of 12th chapter is on type 2 diabetes mellitus. 13th chapter reviews the genomics of type 2 diabetes mellitus (T2DM) in the context of its relevance to its application in a diabetic clinic. A developmental approach on pancreatic β-cells has been provided in 14th chapter. Resistant hypertension in diabetes, and a circadian rhythm of sleep, obesity and diabetes have been described in 15th and 16th chapter respectively.