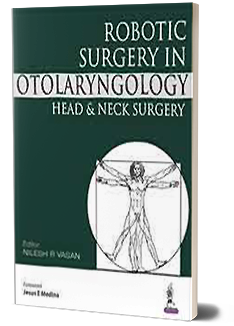 FDA approved transoral robotic surgery in late 2009, many otolaryngologists—head and neck surgeons have taken the challenge to further their training and become credentialed in the use of the “da Vinci robotic surgical system”. The da Vinci robot is particularly well‑suited for patients; it enables surgeons to operate in areas previously hard to access such as the base of tongue. Since robotics in otolaryngology is still in its infancy, the operations that have been described in this book will almost certainly undergo significant change. This book has been divided into four sections where the robot is currently used. The four sections are transoral robotic surgery (TORS), thyroid, head and neck reconstruction and the last section is robotic procedures in evolution. The first section is comprised of five chapters and discusses on transoral robotic surgery for tonsil cancer, base of tongue tumors, hypopharynx, supraglottic laryngectomy (SGL) and obstructive sleep apnea. The focus of second section is on transaxillary robotic thyroidectomy, robotic thyroidectomy for American (Western) patients and the facelift approach in robotic thyroidectomy. Third section describes transoral robotic surgery in head and neck reconstruction and the last section describes robotic procedures that are currently in the process of study and included with the real possibility that they may one day become commonplace such as robotic‑assisted neck dissection, skull base surgery, surgery for nasopharyngeal tumors, otologic and neurotologic surgery.