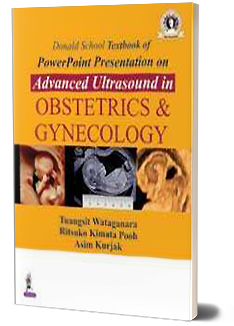 The book titled “Donald School Textbook of PowerPoint Presentation on Advanced Ultrasound in Obstetrics & Gynecology” is essentially a blend between an Atlas and a Textbook. This book is presented with power point presentation platform on the latest advancement of ultrasound application in Obstetrics and Gynecology. It demonstrates key learning points related to the concepts of Ultrasound in Obstetrics & Gynecology. The book has 42 presentations, which cover all aspects related to ultrasound management of various abnormalities in Obstetrics and Gynecology. Chapter 1 is presented with Sonoembryology techniques. Chapter 2 emphasizes on etiology during normal pregnancy. As we move on to further chapters, it discusses on several abnormalities such as gestational trophoblastic diseases, noninvasive prenatal testing (NIPT) for aneuploidies, multifetal pregnancies, fetal neuropathology, gestational diabetes Mellitus and other anomalies are showed in a very formal and diagrammatic manner. Benefits of color doppler in gynecology, three and four dimensional ultrasound in gynecology are also emphasised.