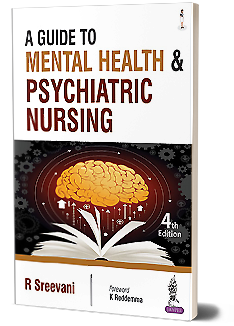 Mental health is defined as a level of psychological well-being, or an absence of a mental disorder. It is the psychological state of someone who is functioning at a satisfactory level of emotional and behavioral adjustment. Psychiatric nursing is the specialty of nursing that cares for people of all ages with mental illness or mental distress, such as schizophrenia, bipolar disorder, psychosis, depression or dementia. The fourth edition of “A Guide to Mental Health and Psychiatric Nursing” consists of 15 chapters. This book is well written and structured so that it is straight-forward for the reader to make sense of the complex but essential aspects of psychiatric nursing. The breadth and depth of information presented is ample and well expressed thus encouraging a practical approach to psychiatric nursing. Various topics in chapter 1 such as evolution of mental health services and treatment, development of modern psychiatric nursing, prevalence and incidence of mental disorders have been revised and updated so as to keep the student nurse abreast of the latest happenings. New topics such as Mental Health Care Act 2013, Mental Health Policy 2014, DSMV, developments in National Mental Health and District Mental Health Programs have been introduced. The contents in some of the chapters such as therapeutic communication and nurse-patient relationship, nursing management of patients with substance abuse disorder, psychiatric emergencies and crisis intervention, legal issues in mental health nursing and community mental health nursing have been reorganized for better comprehension. The other chapters were left untouched as they well suited the requirements of the readers. MCQs covering the whole topic have been included at the end of each chapter.