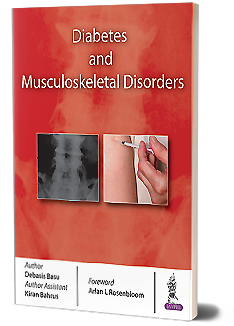 Diabetes is associated with several musculoskeletal disorders. The incidence of diabetes mellitus (DM) and the life expectancy of the diabetic patient have both increased, resulting in the increased prevalence and clinical importance of musculoskeletal alterations in diabetic subjects. The exact pathophysiology of most of the musculoskeletal disorders remains obscure. The development of musculoskeletal disorders is dependent on age and on the duration of DM. Most of musculoskeletal disorders can be diagnosed clinically, but some radiological examination may help, especially in differential diagnosis. This book “Diabetes and Musculoskeletal Disorders” is comprises of seven chapters. The first chapter aims to introduce diabetes and musculoskeletal disorders. Four prominent general theories and many other specific associations have been proposed to explain the molecular pathways in diabetes-associated bone pathology, which have been discussed in second chapter. Role of insulin, autoimmune inflammation and insulin-like growth factor-1, sclerostin and Wnt signaling pathway, loss of incretin effect, and effects of peroxisome proliferator-activated receptor-gamma on bone cell differentiation are covered briefly in the third chapter. The fourth chapter seeks to familiarize the reader with glucose metabolism and bone turnover. Diabetic muscle infarction (DMI), Dupuytren’s contracture, adhesive capsulitis, neuropathic arthropathy, complex regional pain syndrome (CRPS), carpal tunnel syndrome (CTS), muscle cramps, forefoot osteolysis, etc. are described in the fifth chapter. Antidiabetic medicines and bone safety, and linking inflammation in arthritis and diabetes are discussed in sixth and seventh chapter of this book.