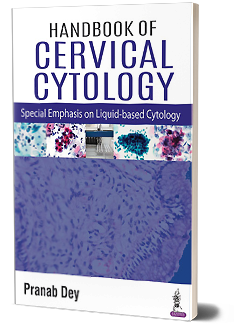 This book focuses on Handbook of Cervical Cytology: Special Emphasis on Liquid-based Cytology. Cervical cytology became the standard screening test for cervical cancer and premalignant cervical lesions with the introduction of the Papanicolaou (Pap) smear in 1941. Liquid-based, thin-layer preparation of cervical cytology specimens was a subsequent modification in technique. This book consists of 11 chapters, which include anatomy, normal cytology of the female genital tract and approach of reporting, sample collection, liquid-based cytology and automated screening, the bethesda system of reporting cervical cytology, negative for intraepithelial lesion or malignancy, atypical squamous cells, squamous intraepithelial lesions and invasive squamous cell carcinoma, abnormality of glandular cells, the presence of endometrial cells, other malignant tumors, and screening, quality control and management of cervical lesion. This is a short handbook on cervical cytology for the practising cytologists, students and cytoscreeners. The differential diagnosis and management of the lesions also have been highlighted. Special emphasis is given on liquid-based cytology preparation, and the various practical view points of the interpretation of liquid-based cytology are also discussed.