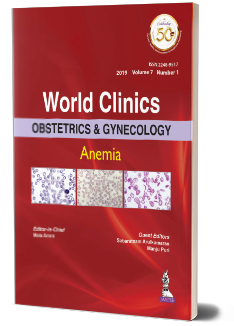 This book focuses on World clinics Obstetrics and Gynecology: Anemia. Anemia persists as a global problem despite improved nutrition. World Health Organization (WHO) estimates that one-third of the world’s population suffers from anemia and majority are from developing countries. India continues to be one of the countries with a high prevalence of anemia despite the national nutritional anemia control program which was rolled out in 1970. This book consists of 11 chapters, which include overview of anemia, applied clinical pathology for the diagnosis of anemia, iron deficiency anemia in pregnancy, folic acid and vitamin B12 deficiency anemia, hemolytic anemias, anemia due to chronic diseases in pregnancy, thalassemia in pregnancy, aplastic anemia and myelodysplastic syndrome, blood component therapy and transfusion practice in obstetrics, sickle cell anemia, and pregnancy and anemia. Anemia in pregnancy is defined as hemoglobin (Hb) level of less than 11 g/dL in first and third trimesters and 10.5 g/dL in second trimester. In nonpregnant women, Hb level of less than 12 g/dL is considered as anemia. Among nutritional anemias, iron deficiency anemia (IDA) is the commonest both in India as well as globally. Thalassemia is the commonest hereditary anemia, followed by spherocytosis and sickle cell disease. This book is useful for the obstetrician for the early detection and prompt treatment of anemia during pregnancy.