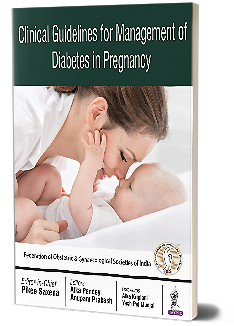 BOOK TITLE: Clinical Guidelines for Management of Diabetes in Pregnancy

This chapter describes the intrauterine programming in diabetic pregnancy. Diabetes during pregnancy could be result of one of the three reasons namely continuation of pre-existing type 1 or type 2 diabetes or it may be new development of diabetes during pregnancy, which is often termed as gestational diabetes (GDM). Diabetes in mother has been proposed to lead to an adverse intrauterine programming and unfavorable maternal environment causes inappropriate fetoplacental development and growth. Currently, the concept of intrauterine programming, although understanding is not very clear, refers to the ability of an adverse outcome during development to cause changes in physiology, metabolism, and epigenome of an individual and resultant increase in risk of chronic diseases at the long run. This concept includes changes at different developmental points and alterations resulting from a disturbance at the cellular, tissue, or organ level that can either be adaptive or in the intrauterine milieu. This chapter covers the prevalence of diabetes in pregnancy, glucose metabolism in normal and diabetic pregnancy, impact of maternal hyperglycemia during pregnancy on fetal metabolism, and mechanism of increased risk for chronic disease in offspring of diabetic mother.