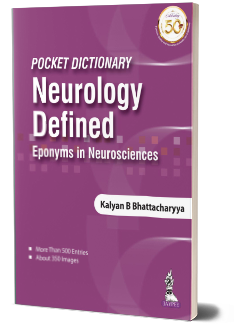 by Kalyan B Bhattacharyya

The aim of this book is to focus on Neurology Defined: Eponyms in Neurosciences. In an era with tremendous advances in clinical neurology along with related technologies which have led to precision in diagnosis and reduction in mortality and morbidity, it is of great interest that academic and practicing neurologists are interested in eponyms of neurological disorders. The science pertaining to the nervous system evolved systematically by means of personal observations since the time of Hippocrates in the 4th century BC, Galen of Pergamon in the 2nd century, to Thomas Willis and Thomas Sydenham in the 17th century, and then, over the ages, by the contributions of Moritz Romberg, Jean Martin Charcot, Joseph Babinski, Jules Dejerine, Wilhelm Erb, Alois Alzheimer, Hughlings Jackson William Gowers, Gordon Holmes, Kinnier Wilson, PK Thomas, Ian McDonald, David Marsden, Anita Harding and others in the 19th and the 20th century. Investigations for neurological diseases were scarce and primitive, and the sharpest possible clinical acumen, along with the penchant for painstakingly pursuing their cherished goal by burning much midnight oil and candlesticks, were the only weapons in the armamentarium of these neuroscientists. This encyclopedia provides a compendium of eponyms in neurology is a “must have” book that should be read by trainees, neurologists and other professionals allied to neurosciences.