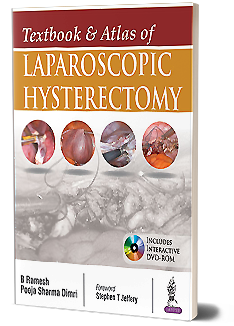 by B Ramesh, Pooja Sharma Dimri

Operative laparoscopy is the standard of care for many pelvic pathologies. The development in the fields of equipment, energy sources, instrumentation, skill and technique have contributed immensely to this trend. Total laparoscopic hysterectomy (TLH) is the signature surgery of the laparoscopic gynecologist. The book “Textbook and Atlas of Laparoscopic Hysterectomy” is a very descriptive text supplemented by a plethora of illustrations and operative pictures. The book is divided into seven sections and 36 chapters. The various chapters have been contributed by prominent endoscopic surgeons from the country. Not only gynecologists but laparoscopic surgeons, anesthetist and urologists have shared their experience. The order of text is streamlined so that the reader goes from the basics to the complicated. The chapters are designed parallel to the expected learning curve. The book starts with basics of laparoscopy. After a touch of history, the chapter on pelvic anatomy describes the relevant anatomical landmarks, relations between structures and course of arteries, veins and nerves which are very useful information for the surgeon. The later chapters describe equipment, instrumentation and energy sources used in TLH. There is also an important chapter on anesthesia in laparoscopic gynecology. The second section of the book is an overview of different routes of hysterectomy including vaginal and abdominal hysterectomy. The third section is an exhaustive line up of different steps of TLH procedure. Each step is described in a different chapter with all variations and modifications. The fourth section gives an overview of robotic hysterectomy, laparoendoscopic single-site hysterectomy (LESS) hysterectomy and daycare hysterectomy. The fifth section deals with complications of total laparoscopic hysterectomy, including bladder, ureter and bowel injuries and vault complications. This is followed by chapter on the role and place of vaginal hysterectomy and alternatives to hysterectomy. Last but not least, we share our experience of TLH with the last chapter on tips and tricks for beginners.