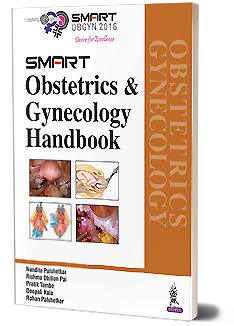 This handbook focuses on “SMART Obstetrics and Gynecology”. Obstetrics is the field of study concentrated on pregnancy, childbirth, and the postpartum period. As a medical specialty, obstetrics is combined with gynecology under the discipline known as obstetrics and gynecology (OB/GYN) which is a surgical field. This book consists of 25 chapters, which include intrauterine insemination, ovulation induction, luteal phase, nuchal translucency, applications of three-dimensional ultrasound in obstetrics, diagnosis and management of intrauterine growth restriction, assessing fetal wellbeing in third trimester, imaging modalities for adherent placenta, intrapartum monitoring of fetus, vaginal hysterectomy in case of previous lower segment cesarean section, management of third and fourth-degree perineal tears, human papillomavirus vaccination, treatment of cervical intraepithelial neoplasia, electrosurgery and energy use at endoscopy, the art of laparoscopic suturing, 3D laparoscopy, laparoscopic hysterectomy, office hysteroscopy, hysteroscopy in Asherman’s syndrome, the incompetent cervix, operative vaginal delivery, obstetric hysterectomy, internal iliac artery ligation in obstetrics, laparoscopic myomectomy, and surgical management of endometriosis. This book is meant to supplement the proceedings of the conference by offering, at a glance, the current state of evidence and practice guidelines for the busy practitioners.