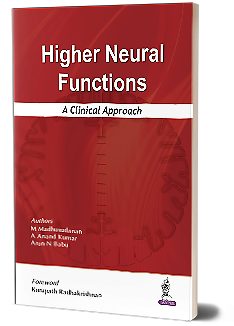 This book Higher Neural Functions—A Clinical Approach explores the known basis of advanced neural functions including attention, language, memory, perception, and higher cognitive and emotional functions. This is one of the most fascinating as well as poorly understood areas of science. The first chapter deals with a general approach to understanding neural function. The second chapter deals with the basis of attention. The third chapter explores the human brain’s use of language. The fourth chapter deals with the basis of memory. The fifth chapter looks at higher cognitive functions and processing. The sixth and seventh chapters deal with the higher processing of sensory stimuli, especially vision. The eighth chapter looks at the basis of our overall perception of us and the environment. The ninth chapter addresses the basis of higher motor functions and programming. The last chapter explores what is known about the neural basis of human emotion. The information provided in this book will be immensely useful to neurologists, pediatricians, psychologists, psychiatrists, and postgraduate students in these specialties.