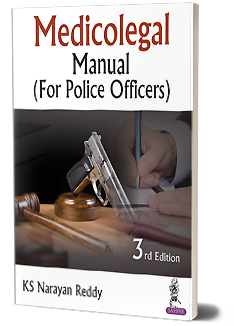 This manual focuses on Medicolegal (For Police Officer). Medicolegal involves both medical and legal aspects, such as medical jurisprudence, a branch of medicine. Medicolegal Manual (For Police Officers) provides necessary guidelines to Police Officers in all aspects of medicolegal problems encountered by them in their routine practice. It is intended to serve as a handy quick reference to the busy Police Officers; but for details, a standard textbook has to be consulted. An effort has been made to identify the common medicolegal problems encountered by Police Officers during their routine work and to deal with these in the context of the procedural formalities to be observed by them. This book consists of 34 chapters, which include death, inquest, trace (physical) evidence, DNA fingerprinting, postmortem changes, medicolegal autopsy, wounds, death in custody, thermal death, starvation, death investigation, impotence, and abortion. Special care has been taken to include all the medicolegal topics and to make the subject up-to-date.