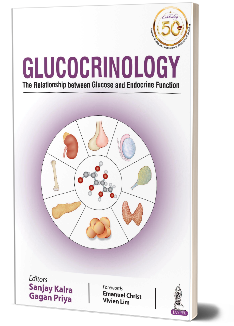 Glucocrinology: The Relationship between Glucose and Endocrine Function

Glucocrinology is defined as the relationship between the endocrine system and glucose metabolism. Importantly, it not only examines the physiological and pathophysiological role of the entire endocrine system on glucose metabolism by summarizing the most important mechanisms of action of all the hormones, but also explors the effect of glucose metabolism on the endocrine system in a bidirectional way (regulatory circles). This book comprised of 4 sections that include the scope of glucocrinology, glucovigilance in endocrinology, endovigilance in diabetes, and specific issues in glucocrinology, which are further divided into 22 chapters. The structured layout of the book discusses each gland, covering its impact on glucose physiology, and its bidirectional relationship with diabetes, metabolic syndrome and hypoglycemia. The need for endocrine pharmacovigilance, and important topics such as bone and reproductive health are given special attention. Wall structured sections explain the concept of glucocrinology in a basic and beautiful manner, making it easy to understand for the endocrinologist and non-endocrinologist alike.