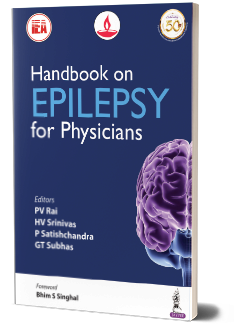 Handbook on Epilepsy for Physicians

This handbook focuses on epilepsy for physicians. “Handbook on Epilepsy for Physicians”, brought out by Indian Epilepsy Association (IEA). Epilepsy is a common neurological problem seen in day-to-day practice of primary care physicians. Epilepsy can be diagnosed clinically and managed easily in about 70–80% of patients. This book consists of 23 chapters, which include short history of epilepsy, febrile seizures, epilepsy and epilepsy syndromes in children, new-onset epilepsy in adults, epilepsy in elderly, seizures but not epilepsy, epilepsy and psychiatric aspects, genetics of epilepsy, investigations in epilepsy, emergencies in epilepsy, drug treatment, diagnosis of epilepsy, drug withdrawal after seizure freedom, therapy resistance and management, surgery for epilepsy, epilepsy and counseling, prevention of epilepsy, epilepsy and law, and role of yoga, exercise, and leisure activities in patients with epilepsy. This book addresses several such issues and is handy for the Physicians to quickly refer and make a proper diagnosis and manage. This comprehensive book is extremely useful for all those who care for persons with epilepsy including family physicians, internists, pediatricians, neurologists, and psychiatrists.